The 2022 Tampa Bay Turkey Trot races (5k and 1 mile) in Clearwater were - as usual- very well organized.
“We had a total of 8000 in both races, up about 600 from last year. The Wednesday night party/registration & t-shirt pickup was well attended,” race director Skip Rogers said.
In the “Faster Way 5k” 4953 runners crossed the finish line on Druid Road. 19-year-old Michael Fiore from Clearwater was the overall winner in 15:46 Second place was for Tom Palamar, 21, from New Port Richey in 16:08 Third male was Dylan Nolan, 17, from Oldsmar, who finished in 16:21 First overall female was Alicia Belko, 28, from Hainesport (NJ) with a time of 17.59 Second place was for Kennedy Downey, 18, from Clearwater in 19:14 Third female was Sarah Cipolla, 35, from Safety Harbor. Her time: 19:27 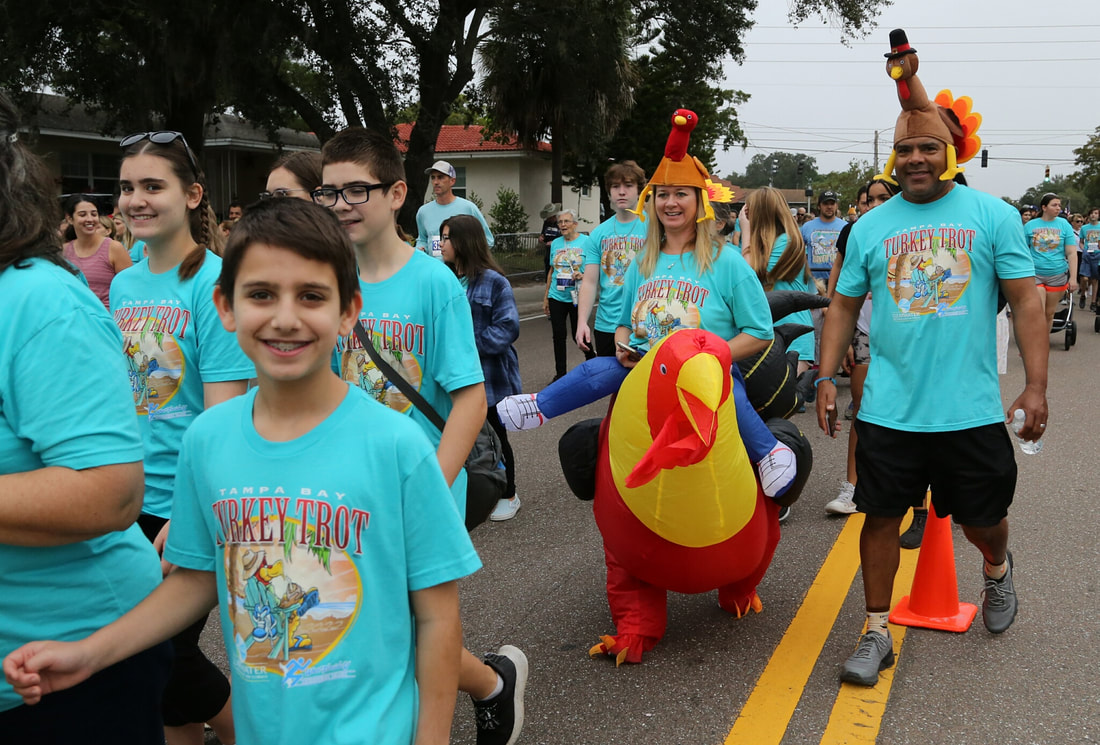 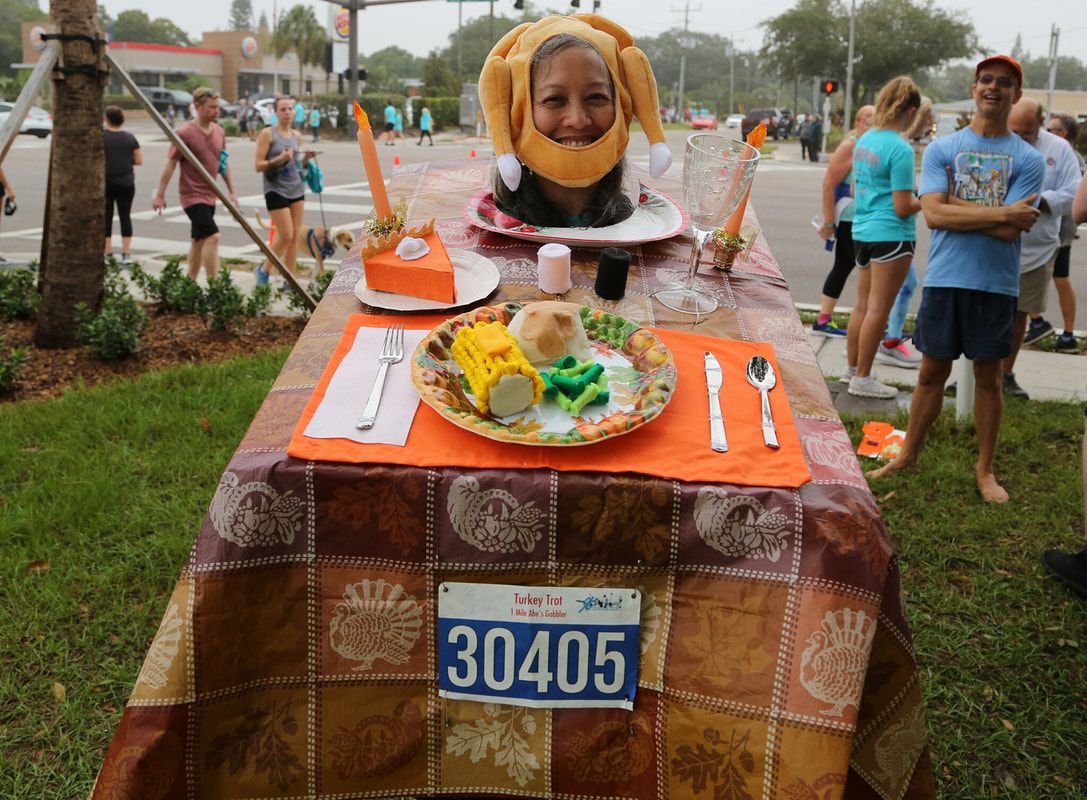 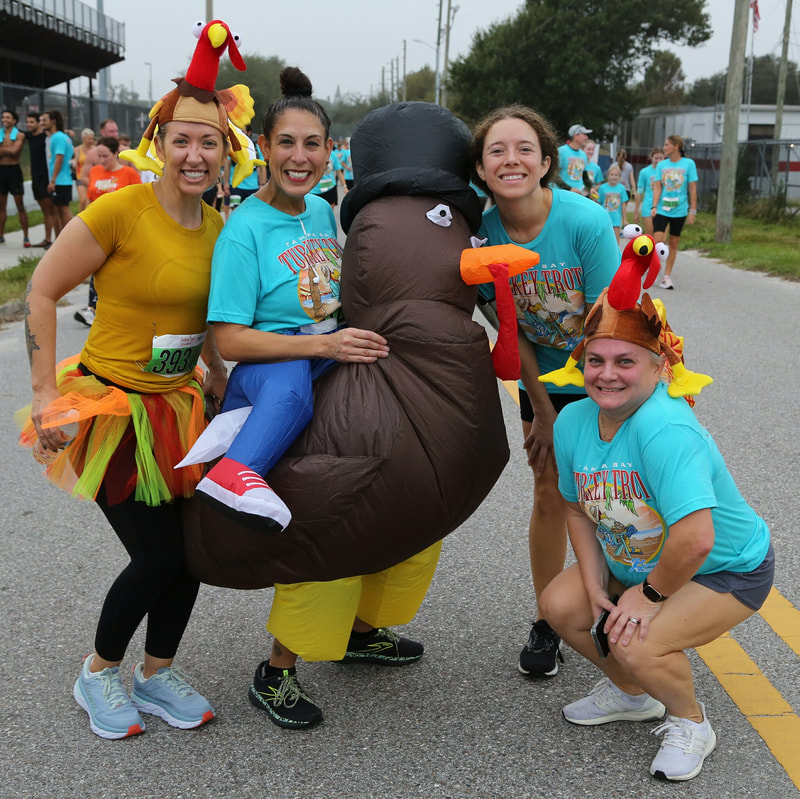 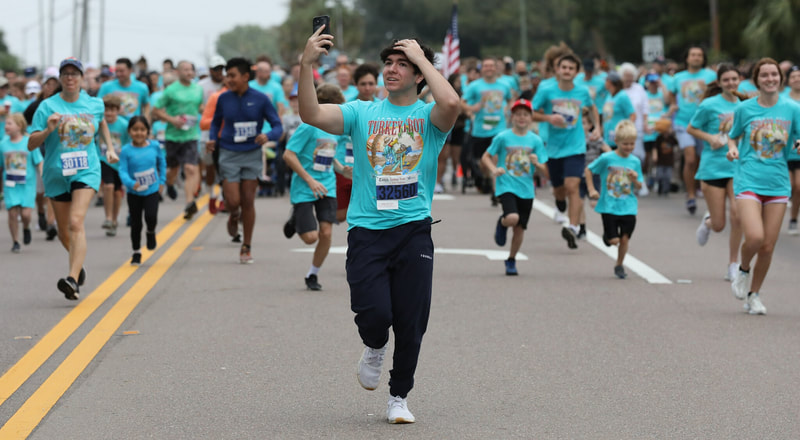 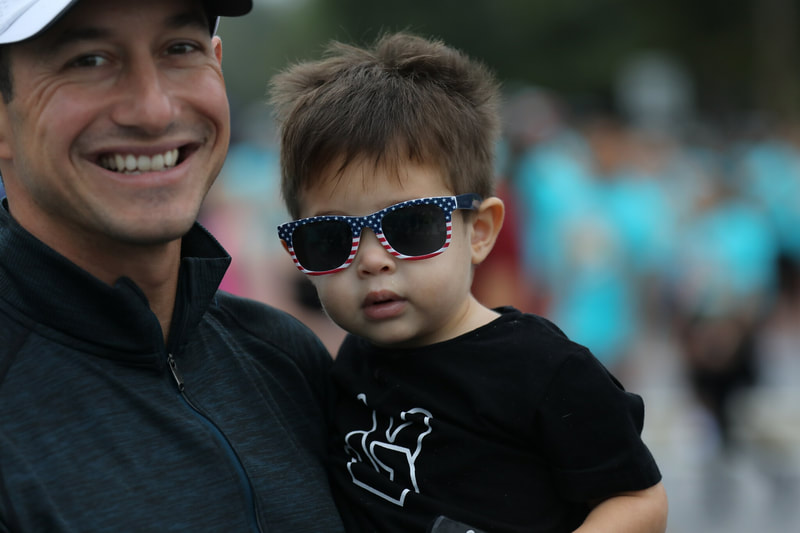 A whopping 7.497 runners and walkers had a fantastic time at the 2021 Tampa Bay Turkey Trot in the early hours of Thanksgiving Day in Clearwater.
Roy Hobson from Sarasota crossed the finish line in 15:37 to become the male 5k champion while Jacqueline Brasseale from Evansville (Indiana) was first female in 18:32  Kathy Frailing (54) from Tarpon Springs was 1st female master in 19:37 while Lee Stephens from St Petersburg was the fastest 40+ male runner in 16:30
In the 5K FASTer Way  a total of 4.678 runners crossed the finish on Druid Rd.
The 1 Mile Gobbler, that started at 8:30 was counting for 2.819 runners and walkers to share the road.
They were part of a 42 year old tradition to get out and about near  Clearwater High School, a tradition that was interrupted last year by the corona pandemic. 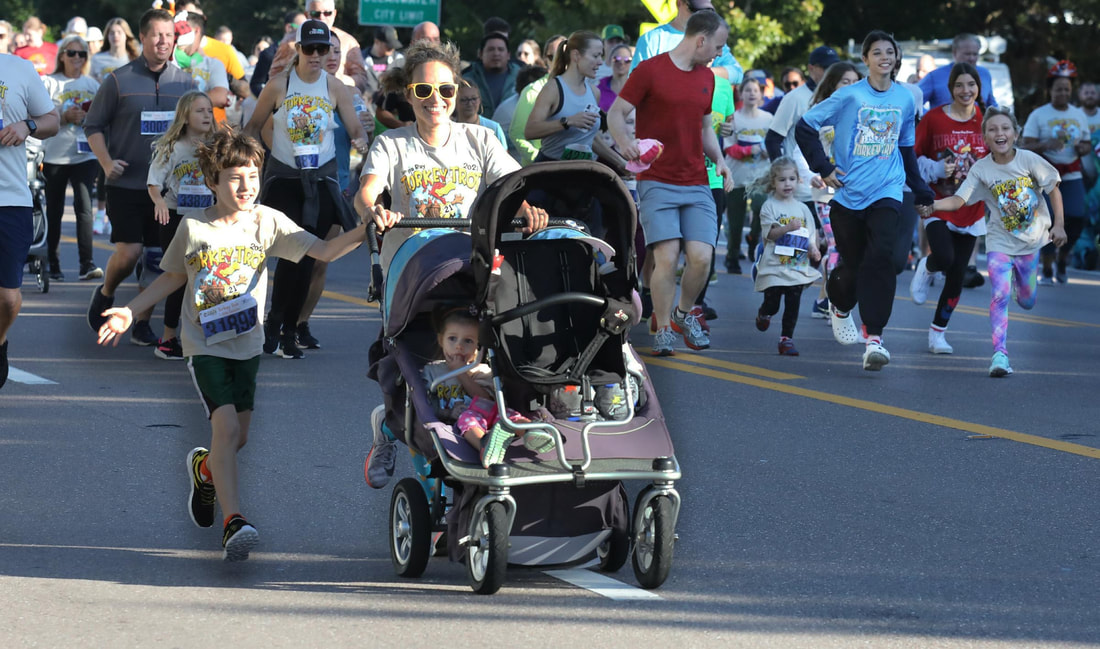 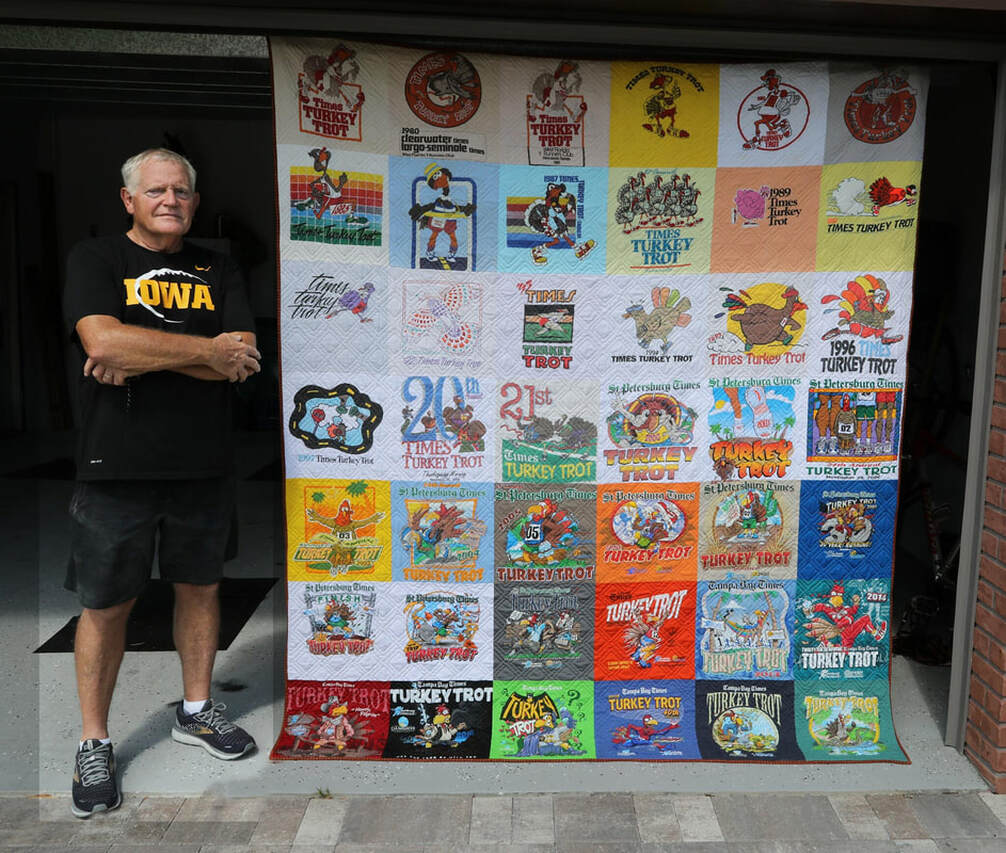 Alan did it again and again and again 43 times.  Proof is in the Quilt!
Let me introduce you to Alan Ranker (70) from Clearwater FL.  He’s the proud owner of all 43 different Turkey Trot shirts.  He also has personally run all of them. Not the 5k but –of course- only the real 10k distance.  From the first one in 1979 to the (virtual) one last year (2020) when the biggest race in Pinellas had to be cancelled because of the corona virus.

“I live only 1 mile from the start, so that is always a good warmup on Thanksgiving day,” says Alan who was 28 years old when the first Turkey Trot 10k started – There were 995 runners, who ran a slightly different course than in recent years.
How did he find out about the first Turkey Trot? “Back in the days I was an avid runner and ran a lot of races, among others the Bay to Bay,   the inaugural Skyway Bridge run in 1988, The New York City marathon as well as the Boston marathon, which always started at noon. I was not the fastest runner, but I could shake a leg. But the Turkey Trot became my favorite, something to look out for year after year! “says Alan.

He got blind on one eye caused by an accident. Also suffering from some hearing problems, but still running strong.
​
Anyway, he had all his shirts combined into one big quilt, which was stitched together by Helen Farog from Tarpon Springs.  As we all can see she did a fantastic job! There are 42 on the front + the extra one for the virtual race last year on the back.    It covers a complete wall in his house on Fairfield Drive in Clearwater.    Composed     massive – unique - and very colorful piece of living running history
Amazing!

There were over 12,000 finishers at the 2019 Tampa Bay Times Turkey Trot races in Clearwater 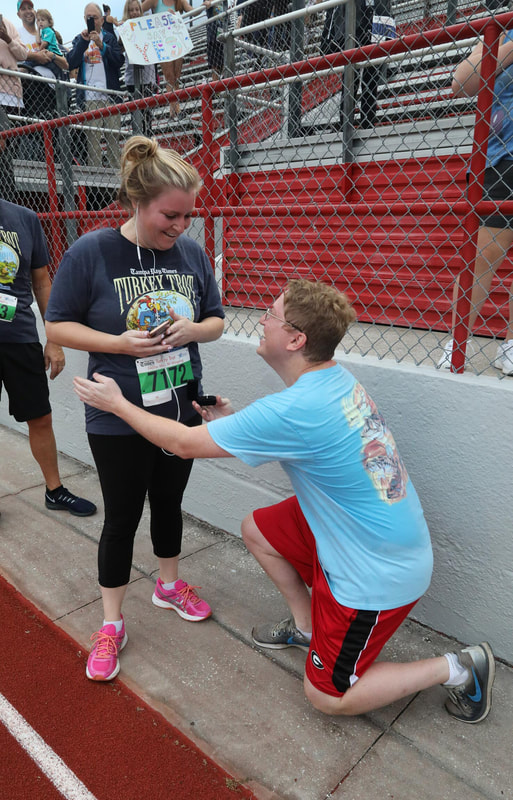 ​ She did not make it into the first 125 females in the 5k Wingding, but Kelley Holz from Atlanta –Bib# 7172 got a much better trophy than the usual ‘top-finisher-mug’.

When she crossed the finish wearing pink Asics shoes in a time of 39:14 she was stopped by her fiancée Aaron Mellman (35) who went on his knees and asked her: “Will You Marry Me” – Kelley (32) said yes, time for Aaron to come up with the ring!

The couple is living in Atlanta and met 3 years ago at the ‘Run for Brews Run Club’ in Atlanta. Kelley is an accountant and Aaron is in Finance. No date has been set yet but will most likely be Fall 2020. 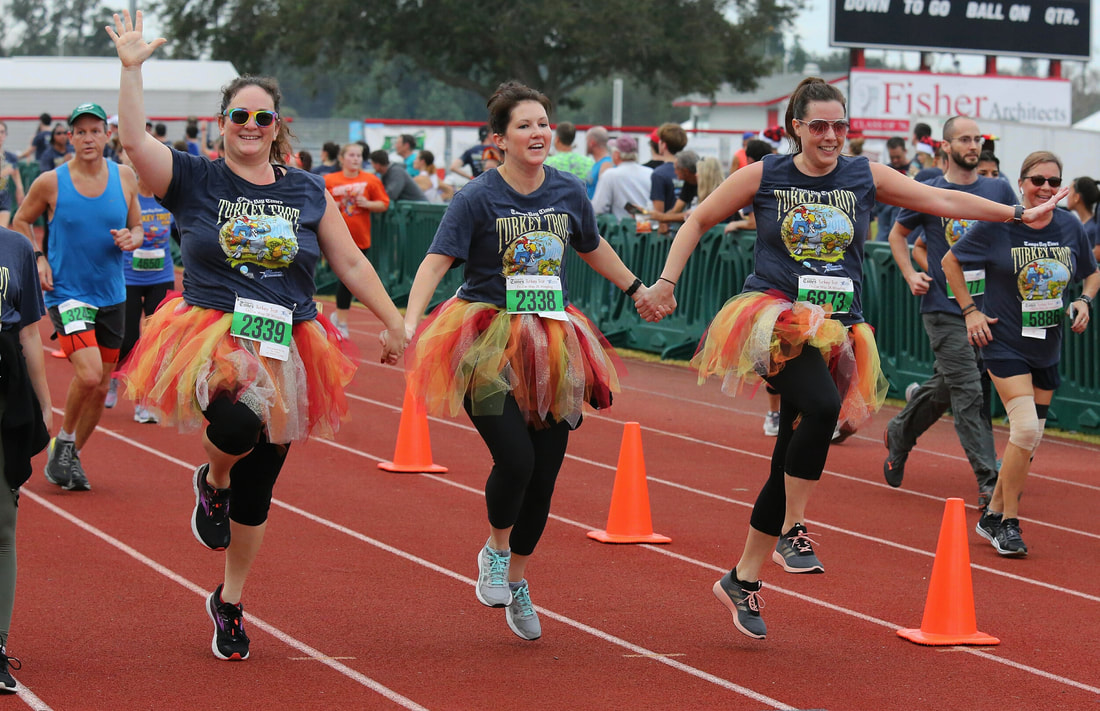 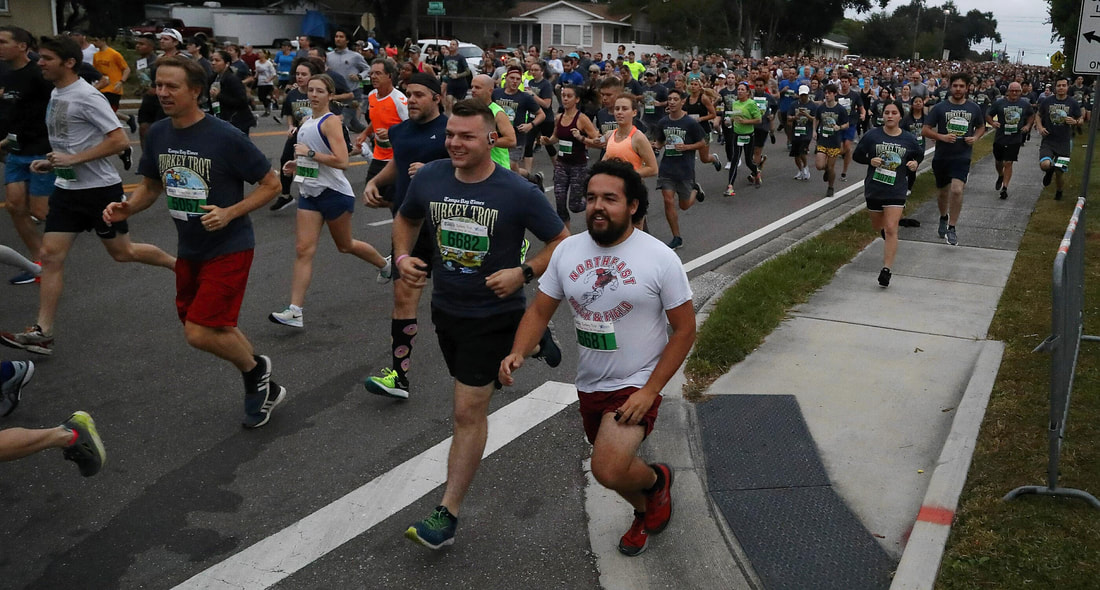 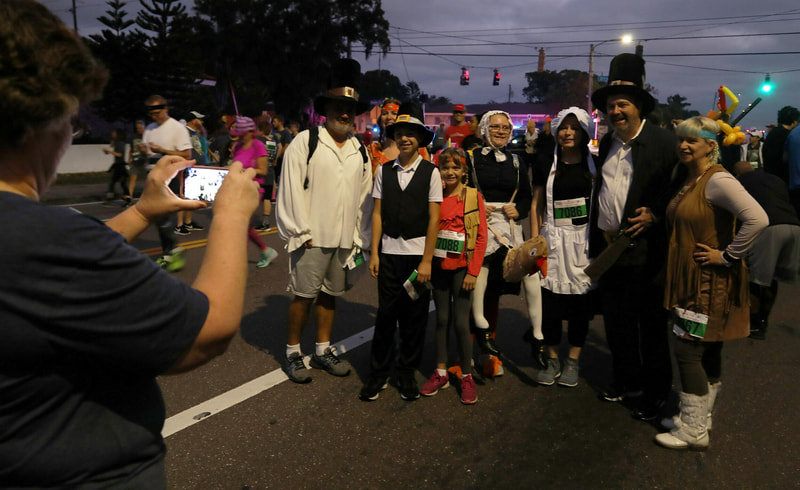 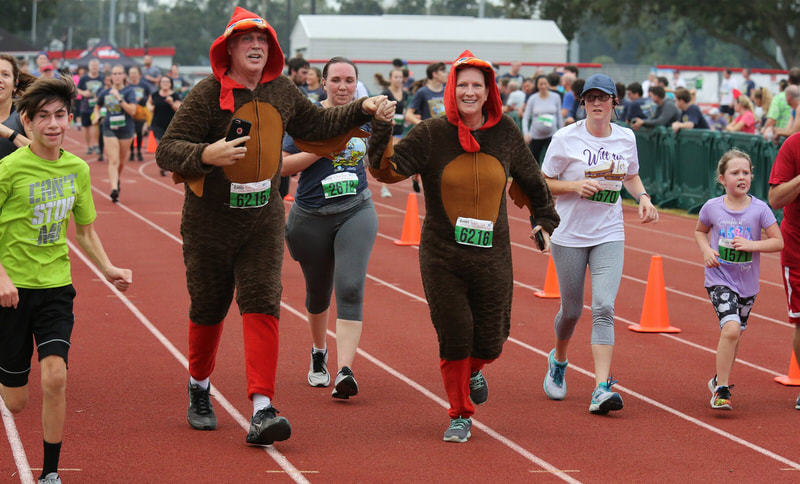 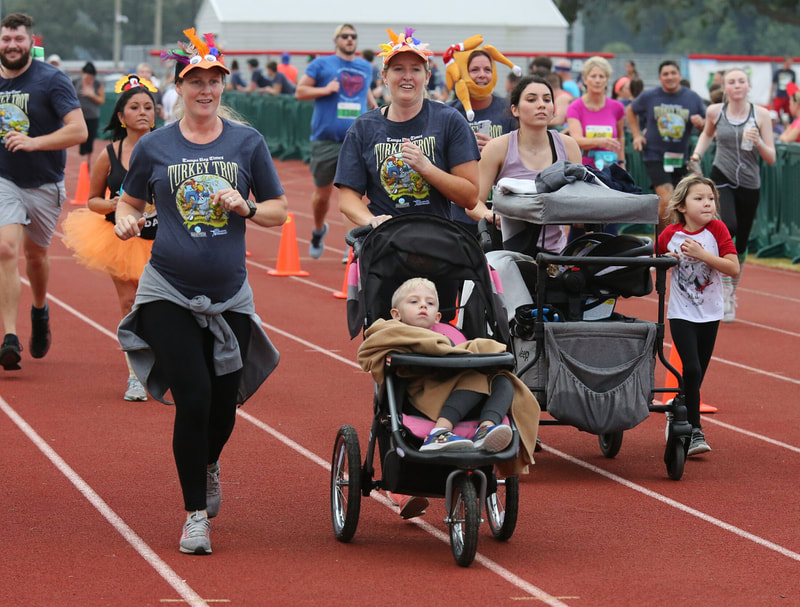 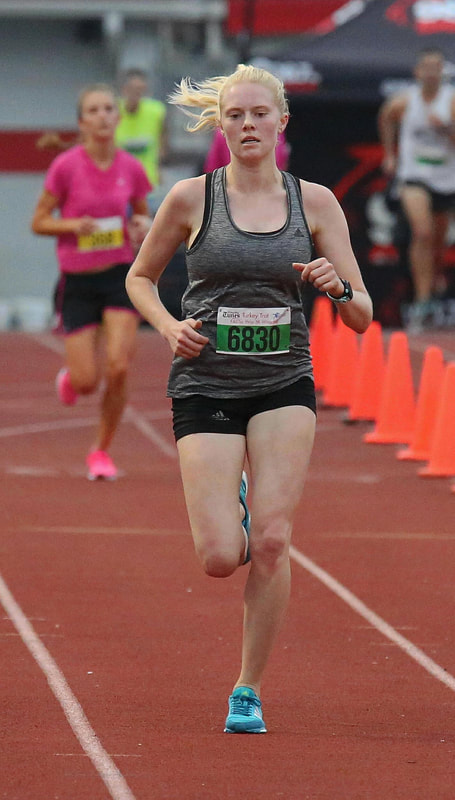 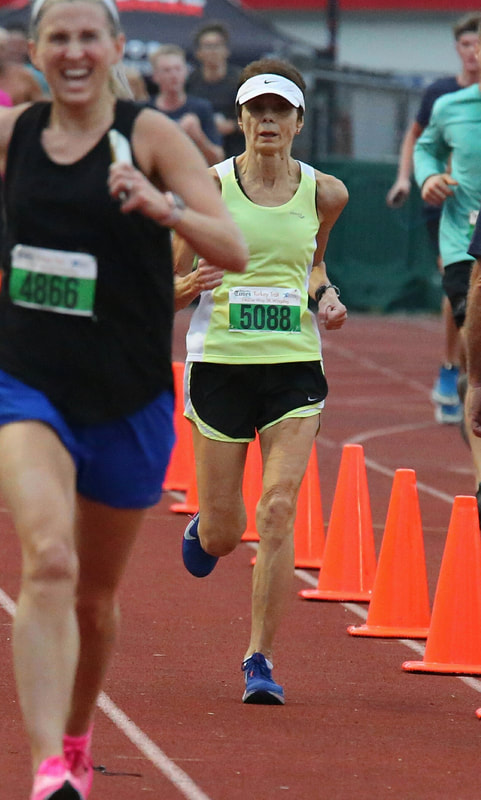 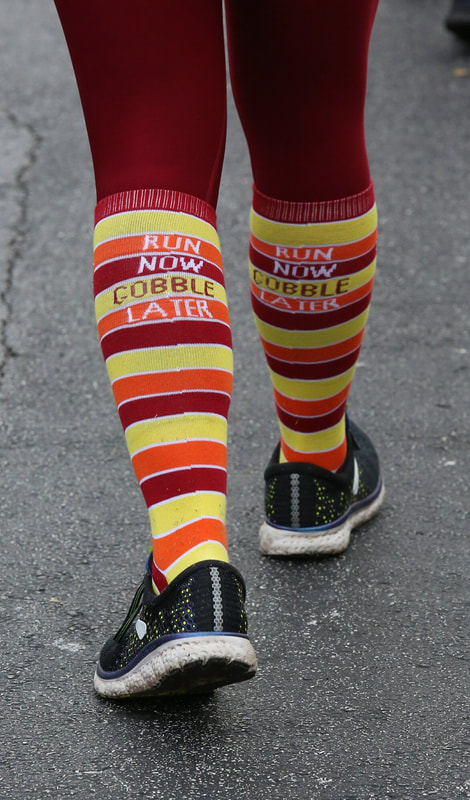 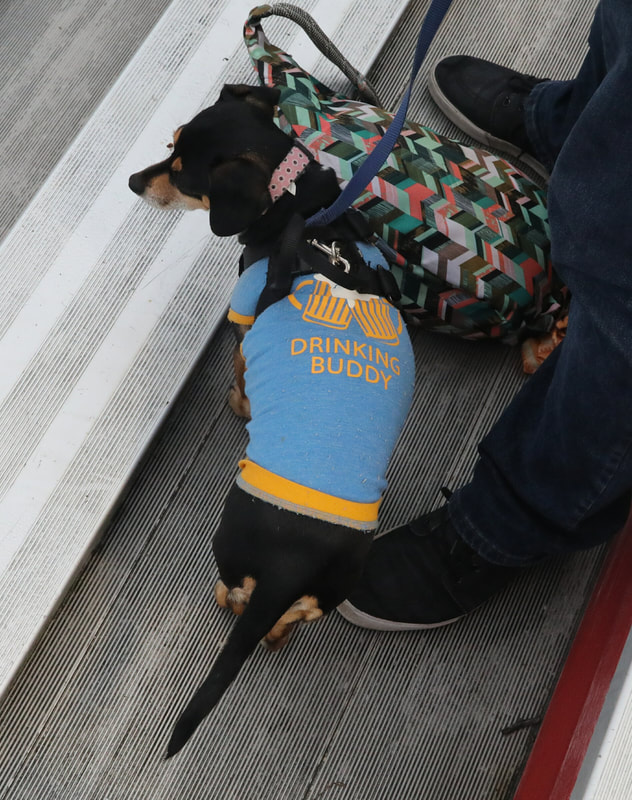 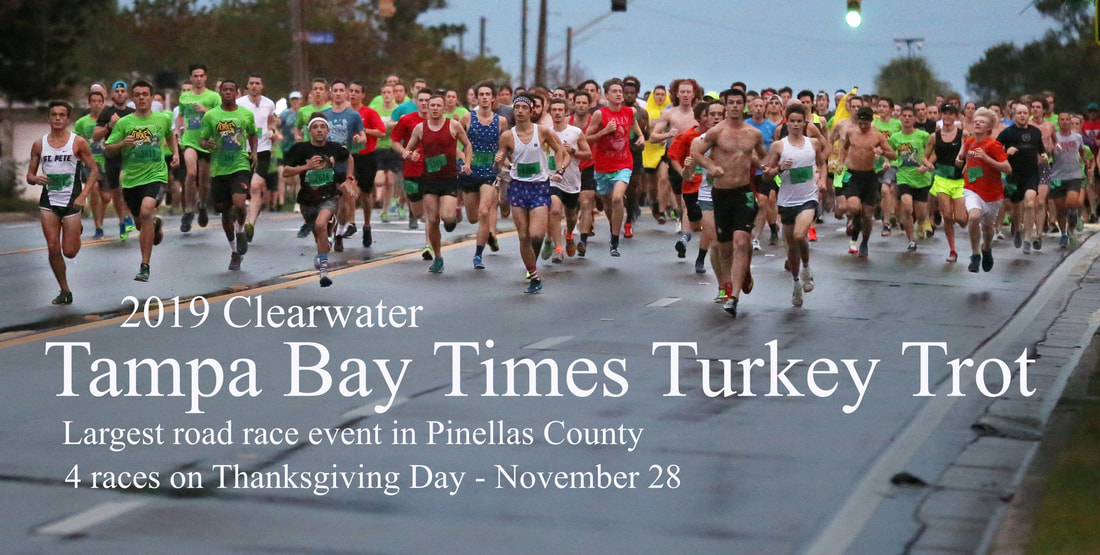 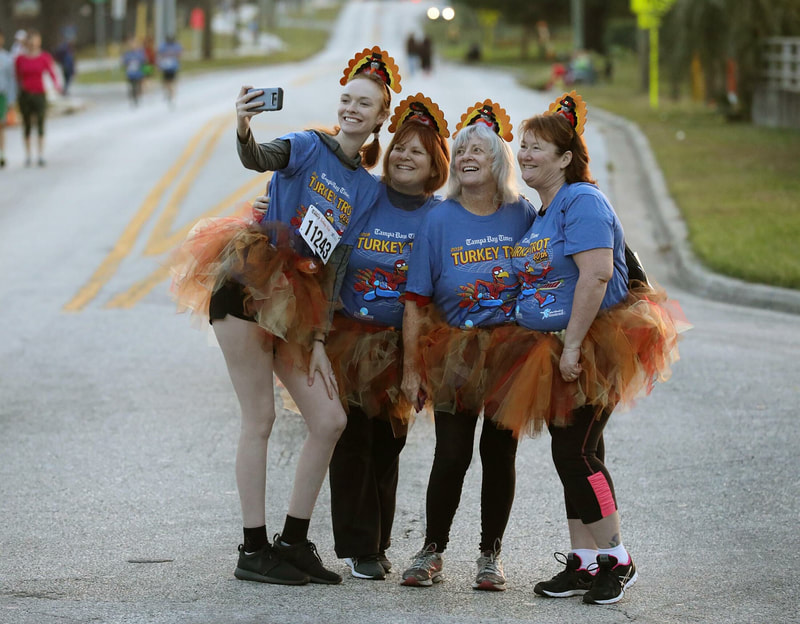 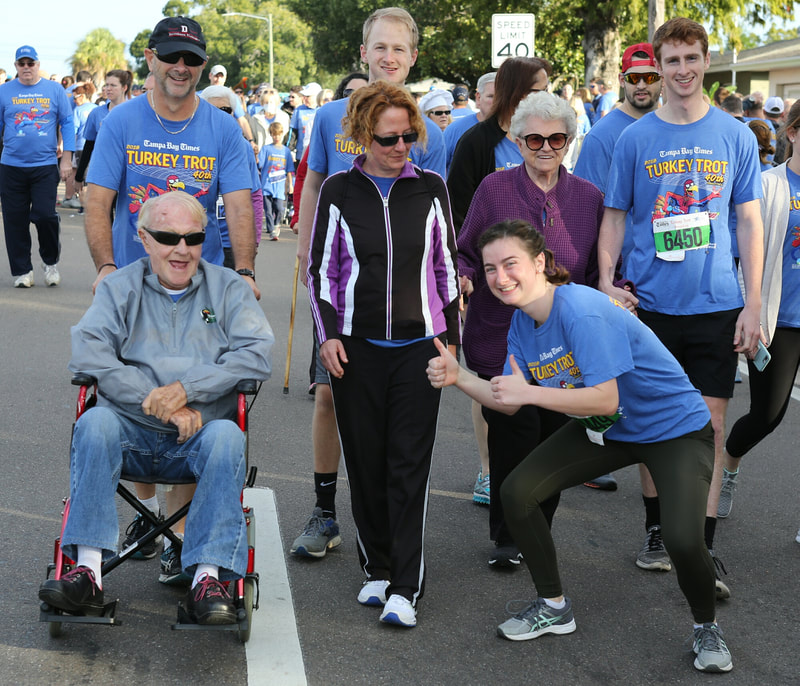 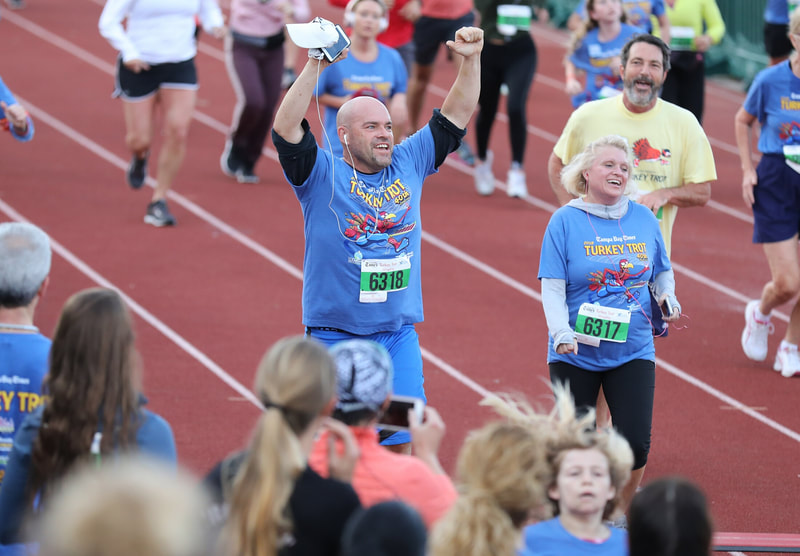